There are two classes of waters within the Interstate Environmental District: Class A and Class B. Class B is divided into two subclasses, B-1 and B-2. The Commission’s water quality regulations shall apply to all waters within the Interstate Environmental District. In addition, each class or subclass of the waters shall meet the requirements and be available for the uses as provided for that class or subclass. Different classifications of waters are appropriate for different areas because of varying activities associated with industry, commerce (including waterborne transportation), recreation, and aesthetic enjoyment. All waters should be aesthetic assets and should, at a minimum, be available for those recreational uses which do not bring the human body into direct contact with the water. 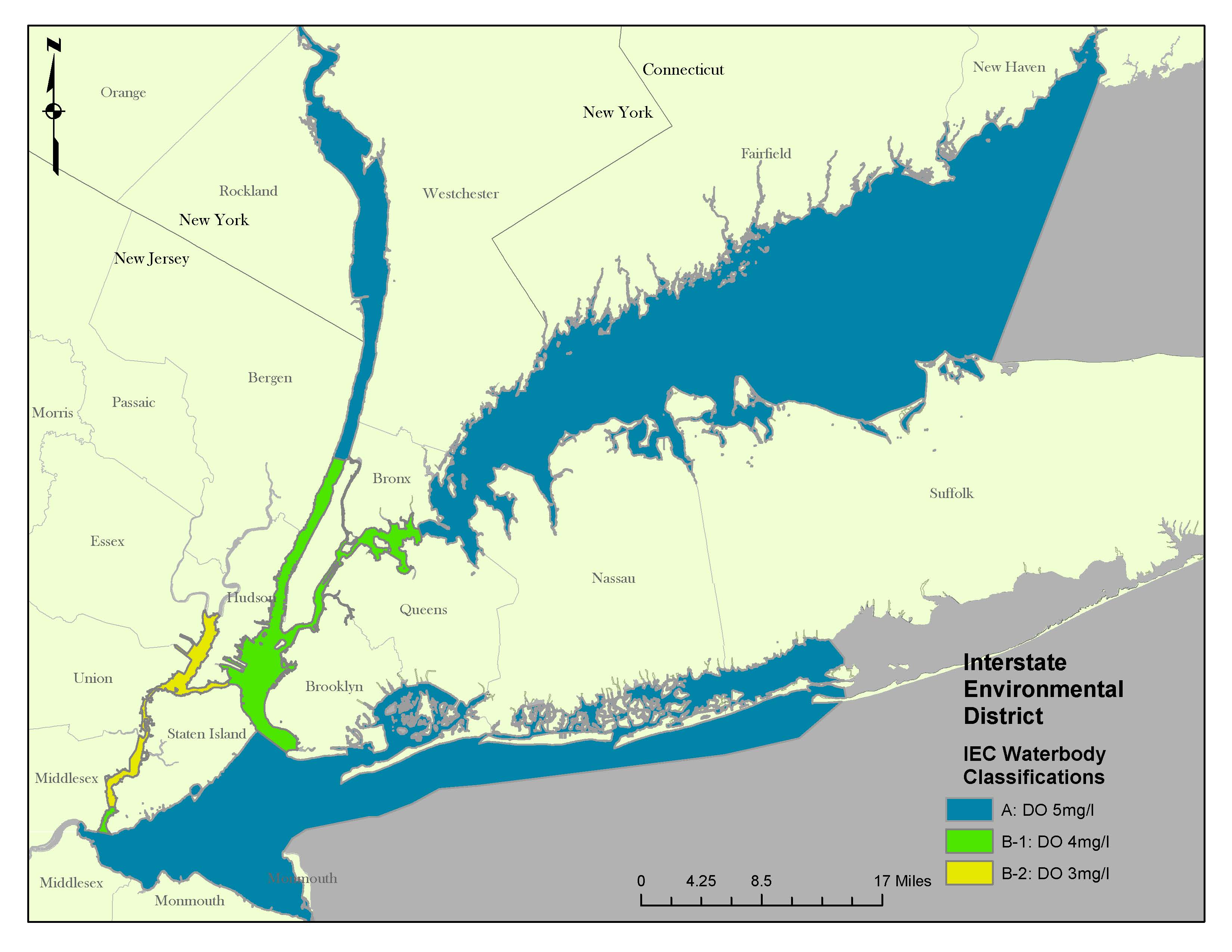 Streams and other waterbodies shall in all respects be suitable for their best intended uses as follows:

Class A: Suitable for all forms of primary and secondary contact recreation and for fish propagation. In designated areas, they also shall be suitable for shellfish harvesting.

Class B-2: Suitable for passage of anadromous fish and for the maintenance of fish life in a manner consistent with the criteria established by the general regulations.

As used in these regulations:

The following waters of the Interstate Environmental District are classified as Class A: 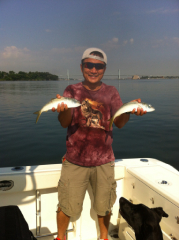 the Hudson River from its confluence with the Harlem River to the New York-New Jersey State line opposite Hastings-on-Hudson;

the lower New York Bay northerly to a line drawn from the tip of Fort Wadsworth on Staten Island to the tip of Seagate in Brooklyn;

and the Atlantic Ocean and the estuaries and tidal waters thereof west of the easterly side of Fire Island Inlet and continuing into lower New York Bay.

The following waters of the Interstate Environmental District are classified as Class B-1: 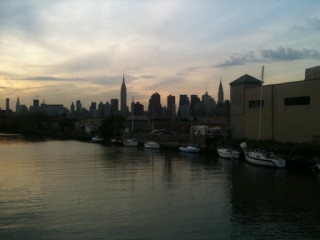 the Hudson River south of a line from the confluence with the Harlem River into the upper New York Harbor and the portion of the Lower Bay which is north of a line from Fort Wadsworth in Staten Island to the tip of Seagate in Brooklyn. For the purposes of these regulations, the upper New York Harbor terminates at the mouth of the Kill Van Kull (at a north-south line drawn from the northernmost point of Staten Island to the easternmost point at Constable Hook in Bayonne) and to the mouth of the East River (a true east-west line passing through the southernmost tip of Manhattan Island at the Battery and extending the east shore of the East River in Brooklyn);

the waters of the East River north of a true east-west line passing through the southernmost tip of Manhattan Island to the Battery extending to the Whitestone Bridge (except Newtown Creek) and including the Harlem River to its confluence with the Hudson River;

The following waters of the Interstate Environmental District are classified as Class B-2:

The waters of the Arthur Kill north of Outerbridge Crossing and into and including the Newark Bay up to the mouths of the Passaic and Hackensack Rivers and into the Kill Van Kull west of a north-south line drawn from the northernmost point of Staten Island to the easternmost point at Constable Point in Bayonne.

The classifications made by the above regulations shall be governed by and implement any water and related land resource plans, water use plans, or pollution control plans adopted by appropriate agencies of the signatory states. To this end, particular waters within a geographic area designated by these regulations as belonging to a given class or subclass shall, notwithstanding such designation, be deemed to belong to the class or subclass which is appropriate for the use or uses prescribed in the state water and related land resource plan, water use plan, or pollution control plan of the state in which the waters in question are situated.